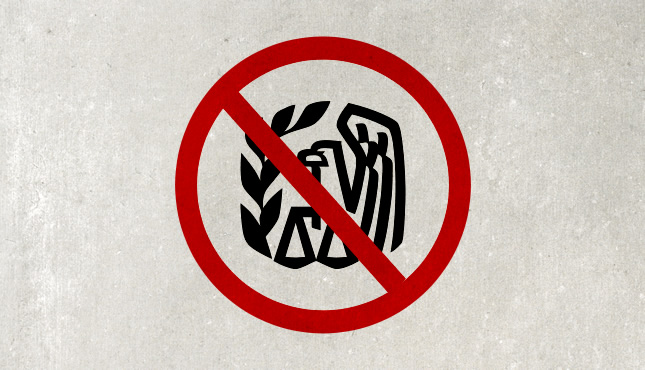 Congress : Stop the IRS’ Abuses of Power and Hold Them Accountable

The IRS is perhaps the best example of an unaccountable, crooked federal bureaucracy run amok.  Steeped in scandal, subterfuge, and security woes, the IRS is in dire need of reform and oversight.

Recently, the IRS managed to hit a new low—with the IRS Commissioner actually admitting that they encourage illegals to STEAL Social Security Numbers! We need to fight back—NOW.

That’s why Republicans in Congress have drafted a series of common sense bills aimed at holding the IRS accountable. Two of them have already passed the House, and we need to make sure that our Representatives and Senators prioritize and fight for all four of the proposed bills to help protect Americans from further abuse and government criminality.

One of the two bills already passed by the House is the IRS Oversight While Eliminating Spending Act (OWES Act) of 2016, which would allow Congress and the American people to control the IRS’ budget. Government agencies should never be able to create their own budgets without Congress.

The second bill that passed the House is the No Hires for the Delinquent IRS Act, which would prohibit the IRS from hiring as an employee anyone who has failed to pay their own taxes. The fact that the IRS hires people who don’t pay their own taxes is outrageous, hypocritical, and has eroded Americans’ trust in the IRS overall.

It’s time for the Senate to approve these bills now.

Two more bills poised to cut back on IRS power are the Ensuring Integrity in the IRS Workforce Act of 2016, which would stop the IRS from rehiring former employees who had been fired for cause, and the IRS Bonuses Tied to Measurable Metrics Act, which will make the IRS prioritize doing their jobs instead of giving IRS employees huge bonuses.

These key pieces of legislation propose measures that should have already been in place ages ago. No agency should have unchecked power, employ law-breakers, or pay out undeserved bonuses at the expense of the abused American tax payer. Yet the IRS has managed to operate this way for a long time.

President Obama has already threatened to veto bills that cut back on IRS budgets or power. Congress needs to stand strong for the American people and override any veto attempts to pass this important legislation.

The time has come to STOP this abuse. Sign the petition to tell Congress: Stop the IRS’ Abuses of Power and Hold Them Accountable and stand firm. The American people are counting on you to act on our behalf.

To Congress:
The American people have been abused by the unchecked power of the IRS for too long. We are respectfully insisting on your immediate prioritization and passage of the following bills:

--the IRS Oversight While Eliminating Spending Act (OWES Act) of 2016,
--the No Hires for the Delinquent IRS Act,
--the Ensuring Integrity in the IRS Workforce Act of 2016,
--and the IRS Bonuses Tied to Measurable Metrics Act.

These commonsense pieces of legislation are simply aimed at holding the IRS to the same standards as any agency or organization that holds so much power and influence.

No agency should have unchecked power, employ law-breakers, or pay out undeserved bonuses at the expense of the abused American tax payer. Yet the IRS has managed to operate this way for a long time.

Please stand up for We the People by passing these critical pieces of legislation and standing firm in over-riding any Presidential vetoes.

The cost of maintaining the status quo is too high. Let’s bring long-overdue accountability to the IRS!
Sincerely,
[Your Name]
Less
Feedback on this petition?
Top