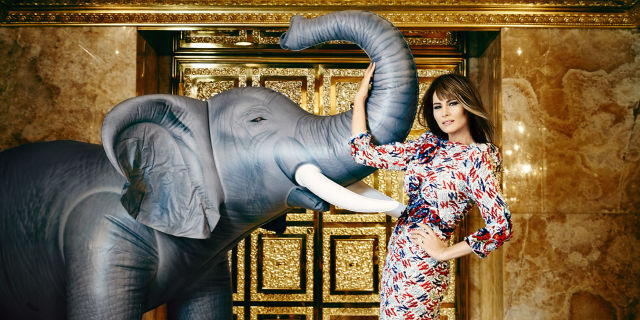 Petition By:
Rick Mitchelson
This petition is now closed.
SHARE

On August 1, 2016, the NY Post again published a nude front-page image of Donald Trump’s wife Melania.  This was the second day in a row that the Post has published Melania in a nude photo, this one titled “Menage a Trump”, in which Melanie is pictured with another woman.

The image published on Sunday, July 31, was titled “Ogle Office” and showed Melania naked with her breasts covered by stars. Melania was a very successful model for the French magazine Max. By definition, models are used to promote or advertise. There is no dispute that Melanie is a beautiful woman.

The photos were both from 1995, when Melania was a 25-year-old model and before she had met Donald Trump.

The NY Post, which is owned by conservative Rupert Murdoch, had previously endorsed Donald Trump for President.  Some analysts wonder if this signals Murdoch’s withdrawing of support.

We the people see this publishing as highly unethical and misogyny at best by the NY Post.  Unsolicited images of family members of Presidential candidates should always be off limits.  Images of Hillary’s husband in compromising positions would also be unacceptable.

We the People are calling on the NY Post to cease publishing any further compromising images of Melania Trump, and issue the Trump family a formal apology.

To NYPost:
Melania Trump, the spouse of Presidential candidate Donald Trump, and potential First Lady of the United States, was a very successful fashion model in her 20’s. During her modeling career some images captured, though certainly artwork, are not appropriate for general publication in a newspaper.

On July 31 and August 1 of 2016, the NY Post published photos and headlines of Melania Trump on your front page, which portrayed her as a potential first lady with less than upstanding morals. The nude images, though cleverly edited, do not show Melania as Donald Trump’s spouse, but instead are the unethical use of artwork used to sell copy.

We the People demand that the NY Post cease further publication of any compromising images from Melania Trump’s past and henceforth issue the Trump Family a formal apology.
Sincerely,
[Your Name]
Less
Feedback on this petition?
Top