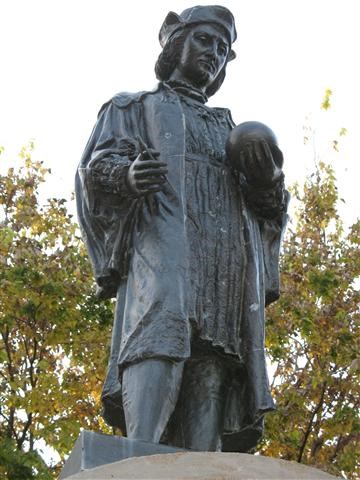 Like statues all over this country, our statues here in Peoria are now coming under attack by a small and vocal minority.  Statues don't physically harm anyone and provide the public opportunities to learn about historic figures.  Civilization and norms have evolved with the times so to expect any person from our past to live up to the impossible standard of perfection is foolhardy.  There are no perfect humans.

Our nation's past, our species' past, is what it is.  Any attempt to erase history should be met with skepticism and resistance.  We have all been taught that we must learn from history or risk repeating it.  For example, communism and socialism are responsible for over 100 million deaths and have never succeeded.  Obviously it would be foolish if a government were ever to try that again!

Presently the Peoria Park District is considering the removal of the Christopher Columbus statue.  Columbus was a man of his time but what we celebrate about Columbus today is his amazing courage and sense of adventure to have sailed across the mighty Atlantic to establish western civilization in the New World.  This New World led to the establishment of the United States of America which has brought peace and prosperity to more people across the globe than any country in history (God Bless America!).

What we have already seen by these Statue Destroyers in other cities is that they will never stop and we certainly can't expect them to stop if they "succeed" in removing Christopher Columbus from our park.  Their next stop will be to topple the great bust of George Washington in downtown Peoria and after that they will go for none other than Illinois' own Abraham Lincoln down at the courthouse.  Don't let them fool you.  The time to stand against this is NOW! Show your support for our statues by signing this petition!

The Peoria Democratic Socialists are demanding that you remove the statue of Christopher Columbus at Laura Bradley Park. This statue has been in Peoria for over 100 years and is piece of Peoria history. It is a gathering spot for the annual Peoria Italian-America Society's Italian Heritage Celebration. It promotes the spirit of adventure and discovery that Columbus brought with him to America which are the same traits the Park District promotes to our children at our parks and playhouse. We are advocating to please keep this statue up in its current form.

As you have seen on the news, small groups of radical leftists across the country are set on tearing down our country's history. We appreciate and respect that the Peoria Democratic Socialists have approached our city's statue using our established peaceful process rather than using violence and vandalism which we have witnessed elsewhere. Nevertheless, taking down this statue would be a huge disappointment to Italian-Americans and America-loving patriots in our City.

We cannot alter history and we acknowledge that history is replete with complicated individuals. Our shared human history is not perfect and we must learn from it or otherwise risk repeating the terrible, brutal suffering generated by man-made institutions like slavery and socialism.

The Park District currently is under intense financial strain. All of the district's time, resources, and funds should be focused on sustaining the critical operations of the Park District and not on removing a statue that is opposed by a very small group with a political agenda. Our children, particularly minority children, rely on our parks and programming for their development and health. We must allocate every dollar possible towards supporting our children!!!

Please do not alter or take down the statue of Christopher Columbus.
Sincerely,
[Your Name]
Less