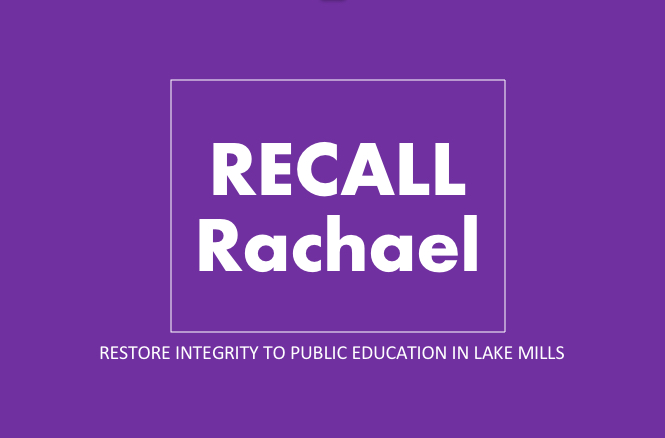 Please sign this digital petition to help us organize names prior to collecting physical petition signatures to recall Rachael Davies from the Lake Mills School Board.  We will have only 60 days to collect physical signatures on paper so this list should give us leads that we can then follow up on.

There is a checkbox to avoid your name from being public. The Recall Team will not be selling any data.

Over the Fourth of July weekend, Rachael Davies publicly posted a profanity tirade on Facebook, which pushed a false narrative of a “racist white lady” hitting a Black Lives Matter protester’s car.  The crash was later found to be the fault of the protester, as evidenced by Lake Mills Police Department’s squad cam.  Rachael even said this was on purpose— IN ALL CAPS.  Rachael’s rush to judgment and inability to gather facts to make informed decisions makes her unable to fulfill the duties of her position as Vice President of the Lake Mills Board of Education.

Her bigotry and communication style have been a repetitive issue and she is unable to uphold the board’s commitment to “ENSURE OPEN COMMUNICATION WITH ALL STAKEHOLDERS.”  She has not admitted to any wrongdoing, nor has she apologized to the community.

On Monday, July 27th, the Lake Mills School Board voted unanimously (with the exception of Rachael) to censure Rachael Davies after another board member explicitly asked Rachael to resign.

We are asking Rachael to resign from her position as the Vice President of the Lake Mills Board of Education.

To Rachael Davies:
We respectfully ask that you resign from your position as the Vice President of the Lake Mills Board of Education. Your recent conduct does not reflect that of our community or what we expect from the Board of Education.

We also ask that you give a formal apology to the community.

We sign this digital petition so names can be organized prior to the collection of physical signatures for an official petition of Recall.
Sincerely,
[Your Name]
Less