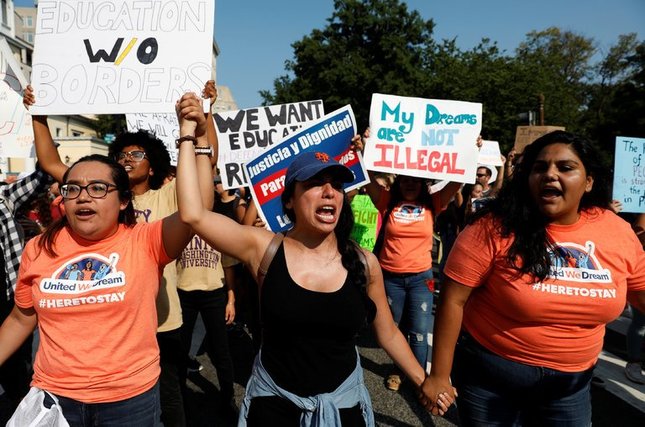 The Deferred Action for Childhood Arrivals program, called DACA, was created by President Obama’s executive order. It allows illegal immigrants who were brought across the border as children to stay in America, go to school, and work, all while protected from deportation. The DACA program covers 690,000 people.

The economic impacts of DACA are severe. American taxpayers must pay for the schools and roads that DACA recipients use, and those same DACA recipients can hold American jobs after graduation. The money they earn doesn’t necessarily stay in America: In fact, Mexico now makes more money from remittances than it does from oil revenue.

This program is immigration policy created by sidestepping Congress – in short, it’s unconstitutional. The effects are harmful to Americans, and Congress shouldn’t seek to continue this program – let alone grant amnesty to those who are using it.

To Congress:
The “DA” in “DACA” stands for “deferred action,” but it might as well stand for “Democrats’ Amnesty.” Nancy Pelosi and other top Democrats are fighting to give DACA recipients a “pathway to citizenship.” I’m signing this petition because the only pathway to citizenship should be legal immigration.

DACA was never passed by Congress, but Congress will decide the program’s future. A study by the Crime Prevention Research Center found that DACA-eligible individuals make up a disproportionate share of the prison population. More than 1,500 immigrants have had their DACA status revoked due to their involvement with violent gangs. In the past few years alone, 2,139 DACA recipients have been convicted of crimes against Americans. The program has serious problems and dangerous consequences. For the sake of national security, Congress should end the DACA program and stop giving illegal immigrants a shortcut to permanent residence in the United States.
Sincerely,
[Your Name]
Less
Feedback on this petition?
Top