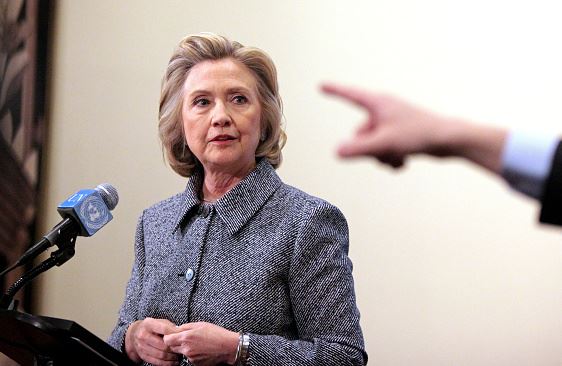 Just before the 2016 election, FBI Director James Comey decided not to recommend that the D.O.J. prosecute Hillary Clinton.

Hillary had used her own personal server, stored in her basement, to store all of her official emails as Secretary of State. This is a violation of policy for which any other government employee would have been fired. Instead, Hillary Clinton walked free.

She stored classified information on that server, which is a crime. Recovered emails show that Clinton knew her emails could potentially be seen by foreign agents. Still, she made no effort to set up a legitimate State Department email address. Clinton had her personal lawyers delete 30,000 emails before handing over the remaining documents to the government. This is destruction of government property, which is also a crime.

Clinton claimed the emails are personal, but ALL emails she sent in an official capacity as Secretary of State, from her work email, are government property. Now, the government can never recover that property, because Hillary Clinton hired BleachBit to wipe the servers and had her close associates smash mobile devices with hammers.

To A.G. Jeff Sessions:
Hillary Clinton’s criminal mishandling of classified information is well-documented. She broke the law, and she got away with it. We now know that the FBI’s investigation into Hillary Clinton was compromised. Biased agents like Peter Strzok and Lisa Page wanted to stop Trump at all costs. James Comey himself has since come out as an opponent of President Trump and ardent supporter of Democrats.

Clinton claims to not have known "C" label on a document means that it is classified. She also claims that she didn't know which emails were classified, because some were unlabeled. Even if a document is not marked with a classification, its contents can still be classified; a cabinet official must have known that. If State Department interns are expected to know what is classified and what is not, the Secretary of State must be held to that same standard.

If anyone else had done what Hillary Clinton did, they would be in prison. A government contractor, Harold Martin, faced 200 years in prison for storing government information on a home server. He was arrested, charged, and prosecuted. Other people are sitting in prison right now for mishandling far less classified material than Hillary Clinton did. Why do they get held accountable, while Hillary gets to retire to her mansion in Chappaqua? Hillary is a Clinton, and the Clintons have gamed the system.

No one is above the law, and Hillary Clinton should be no exception. We ask that you indict Hillary Clinton for the crimes she committed in plain sight. It’s not too late for justice to be served, but when the statute of limitations expires, this chance will be lost forever.
Sincerely,
[Your Name]
Less
Feedback on this petition?
Top