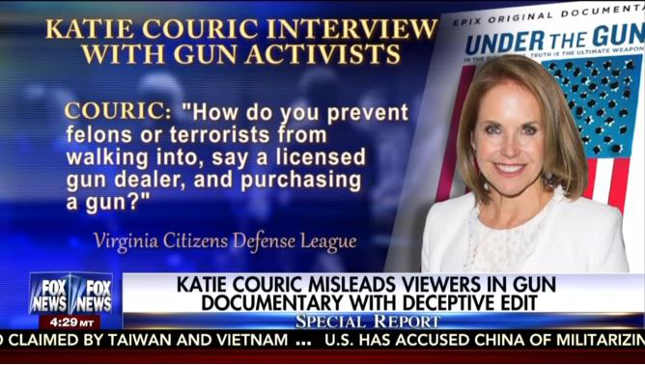 Katie Couric has apologized for manipulating footage in a documentary on guns to make it falsely appear that members of a Virginia gun rights organization could not come up with an answer to a significant question on background checks.

The problem is that an “I’m sorry” after the fact is too little too late. The media are supposed to be held to a standard of truthfulness and fairness. Instead, they have all too often manipulated the facts to suit their own interests.

We saw what happened to Brian Williams and Dan Rather after it came to light that they exaggerated and lied in their journalism. We demand that Katie Couric be held accountable for her purposeful manipulation and misinformation of the public.

This handling of the interviews with the Virginia gun owners group is unfair and undeserved and the dishonesty in editing the documentary reflects poorly on Couric. As the person who conducted the interviews, served as the movie's executive producer, and one of its chief promoters, she should be held completely responsible for any deception that made it into the film’s final cut.

We MUST be able to trust the press. And if we can’t, we MUST demand justice.

Join us in our call to Yahoo! News: Fire Katie Couric for her deceptive coverage!

To Yahoo! News:
Like Dan Rather and Brian Williams before her, Katie Couric has been found to have mislead the public in her dishonest reporting. She made it look like a Virginia gun owners group did not have answers to a key question on background checks, when in reality, all members interviewed did.

In light of this misjudgment, we urge you to fire Katie Couric for her dishonesty. The American public deserves to trust the press. And if we can’t, we demand justice.
Sincerely,
[Your Name]
Less
Feedback on this petition?
Top