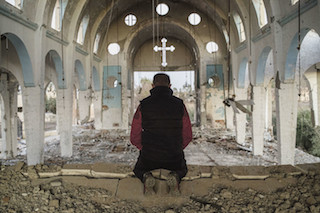 Petition By:
(deactivated)
This petition is now closed.
SHARE

The United States of America is a country that promises religious freedom and equality to all its citizens, yet we see a silent corrupt corporate culture of extreme antagonism towards the faith of millions of Christian citizens who help make their companies successful.  Amazon has recently made a bold statement to the millions of Christians that purchase goods through their platform by refusing to take down highly offensive articles of clothing that denigrate, insult and blaspheme the symbols of our cherished faith, and they did so with extreme contempt and hostility.

The U.S. government recently officially recognized the fact that Christians are facing widespread genocide throughout the world, especially in Middle-Eastern countries like Iraq and Syria, where the Christians are being targeted by Islamic extremist groups such as ISIS and Al-Nusra Front, who have as their goal (in addition to the murder of Christians) the destruction of Churches, monasteries, Christian crosses, Christian icons and Christian art.  While the world turns a blind eye to the atrocities committed against the indigenous Christian people, American-born companies like Amazon make a profit from selling clothing and other items that attack, insult and denigrate our faith and are indirectly partnering with jihadists in their war against Christianity!

We request that Amazon remove all items of clothing (and otherwise) that blaspheme, degrade and insult the Christian faith, and that they begin to respect the faith of their Christian customers.  By removing these items, they will also send a message to the world that they stand in solidarity with all victims of genocide, especially the Christians in the Middle East and Africa, who are going through genocide today.

To Jeff Bezos:
Dear Mr. Bezos and Respected Board of Directors of Amazon.com, Inc.:

Today the Christian faith is under severe persecution throughout the entire world, but especially in Middle-Eastern countries such as Iraq and Syria, where Islamic extremists have systematically targeted, killed and destroyed the people, churches, monasteries, icons, art and crosses of the Christians that have lived there for over two thousand years. President Obama, Secretary Kerry and the United States have officially recognized this genocide against the Christians and other religious minorities in Iraq and Syria.

During this extremely difficult time for Christians of all nationalities and ethnicities, especially those of the Middle East and Africa, Amazon has chosen to dismiss the religious sensitivities of millions of their customers by ignoring their expressed concerns that the Christian symbols are being denigrated and exploited on Amazon.com for the sake of the small profit that Amazon makes on these items.

In your decision to respect the faith of Muslims who asked you to remove the item, known as the “sexy Saudi burka,” then ignore the request of Christians to remove clothing that placed the precious sign of our faith, namely the cross upon a see-through thong, you have made a statement we perceive as aligning yourself and your company with the spirit of these radical Islamic groups that attack the Christian faith and place as a primary goal the insulting, degrading and annihilating of the Christian faith and its symbols.

For those of us who have fled our countries of origin due to the religious persecution that we faced because of our Christian faith, only to come to the “Land of the Free,” and see first-hand that freedom is expressed through insulting instead of protecting our rights to worship freely, is extremely disheartening, demeaning and adds insult to injury. We ask that Amazon please rise above the pervading normalization of “Christian bashing,” and send a message to the world that they will not contribute to genocide by promoting hate, abuse and insult of the Christian faith adhered to and beloved by millions of their customers and millions more throughout the world. Please take down all the items of clothing (and otherwise) that insult, promote hate and blasphemy, and degrade the Christian faith.
Sincerely,
[Your Name]
Less
Feedback on this petition?
Top